AzPowerGirl aka Cara Nicole is a cosplayer, business owner, and stand-up comedian that has been on the show a few times, truly I enjoyed talking to her because she is such a go-getter with a great sense of purpose and she really knows how to push boundaries. Despite having multiple revenue streams, she continues doing the creative thing that she loves.

I also love her energy as she’s such an inspiration to me. In this episode, she speaks on what she’s working on and gives many tips about crowdfunding your projects as a creative.

She has had numerous successful Kickstarter and has grown a large fanbase through her understanding of marketing and social media. “I’ve tried doing different things to stay social online and since we couldn’t do comedy out in public, we took it online,” She says. She holds shows online where she entertains her fans and makes money from commercials.

As a comic book creator and model, Cara Nicole has worked on a lot of books on her own and with different creators. One of her renowned comic books is fire bitch, it’s inarguably hilarious and I’m definitely looking forward to her next release called confessions of a cosplay diva.

Her comic and cosplay books have garnered a lot of attention and to enable her to keep the engagements alive, she often holds group meetings with her 5K+ patrons, joins other people’s shows, and speaks on podcasts with friends which helps her catch up with them in a fun, positive and productive way.

When it comes to crowdfunding, Cara Nicole sure knows how to play her cards right. She emphasizes how coming up with creative ideas for her campaigns has helped her “It’s not about your money. It’s about advertising, It’s about giving you the opportunity to pre-order and get special things that regular people aren’t going to get”.

Despite her prowess in crowdfunding, she has no desire to get paid to do other people’s Kickstarter as it’s as demanding as her life. “It’s a full-time job and I’m working on mine” She laments.

Although she is open to selling her works and having it all handled by a buyer, she wants to make sure to sell them for their worth as she puts in a lot of time and work. As a lover of comic book animated movies, it would be a big deal for her to get her book to that point as well.

Currently, there are a lot of projects she’s working on, one of which is her 52 card pinup, it’s a crown-funded pin-up book campaign, you can see more at https://www.indiegogo.com/individuals/11033193/campaigns.

For those starting out in crowdfunding and wanting to promote their own thing in a certain way, Cara Nicole is a go-to person and believes fear shouldn’t be an option but rather kicking off. Listen to the full episode here to get helpful tips on crowdfunding and creating campaigns on social media.

If you wanna check out more episodes of the podcast click here.
Wanna learn more about stand-up comedy! Click here 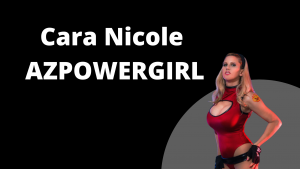